Take me out to the cricket game

When the shoots of spring first poke their heads above the moist earth, Bunti Sarai strikes a bargain with his wife.

"I say, 'Honey, the season's coming up. What's it going to take for me to play cricket?'" 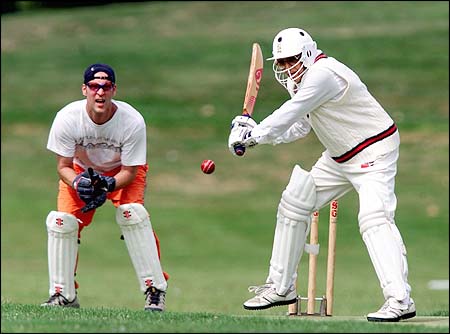 Marysville resident Muslim Habib of the Seattle Cricket Club at bat during a game at Fort Dent Park in Tukwila. Playing for the British-American Chamber of Commerce of the Pacific Northwest is wicket keeper Eric Favorite (on left) of Everett.

The answer is usually a trip to Vancouver, B.C., to buy gold jewelry. Then the Kent man can spend another season playing a 300-year-old sport.

In this country, few have been exposed to cricket, which largely enjoys a reputation on Yankee soil as slow, dull and inscrutable.

However, cricket is one of the most popular sports on the planet, particularly in former British colonies such as India and commonwealth countries like Australia. Other nations with cricket fever include Pakistan, Sri Lanka, Bangladesh, South Africa, the West Indies, and, of course, England.

The game's virtual bible, www.cricinfo.com, is the most visited sports Web site in the world. It has recorded 1 billion page views since the start of the year, and is estimated to reach 15 million fans in 180 countries.

Yet, a perennial "if only" sentiment pervades cricket in America. If only we could get Ichiro or Sammy Sosa to play. If only TV networks would see the genius of the game. If only ... sigh.

But immigrants are invigorating gentlemanly cricket with new energy here, creating a fraternity in a sport that cuts across ethnic, national and class lines. 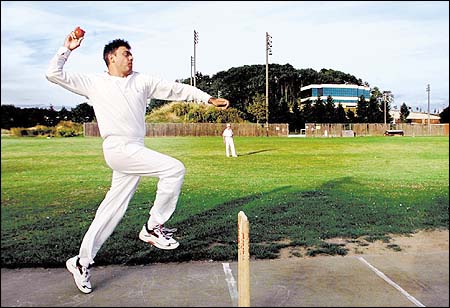 Naveed Deen of the Seattle Cricket Club bowls to an opponent during a game at Fort Dent Park in Tukwila. There are about 300 players in two cricket leagues in the area.

"Ten or 15 years ago, there weren't that many people playing cricket at all in this country," says Atul Rai, president of the United States of America Cricket Association (USACA). "The numbers have increased significantly because of all the immigrants from India and South Asia."

About 10,000 people regularly play cricket in 30 leagues around the country. In Seattle, about 300 players participate in two leagues, the Northwest Cricket League and the British Columbia Municipal League. On weekends, teams travel hours to modified soccer and baseball fields in Portland, Pullman, Vancouver, B.C., and elsewhere to play a game that lasts six to 10 hours.

High-tech workers play side by side with businessmen, taxi drivers, cooks, engineers and students.

Many, like Sarai, joke about their wives' complaints of absentee husbands during cricket season.

"It's an issue for most of the players with their families," says Manish Prabhu, captain of one of two Microsoft teams. "All of our wives find themselves in this pool where they think cricket is their husband's first love, not them." 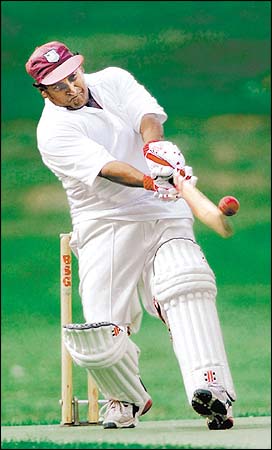 Navaal Ramdin of the Seattle Cricket Club connects with the ball during a game at Fort Dent Park. Cricket is a swingfest in which a batsman (not batter) can be at the wicket (not plate) for hours, literally.


For anyone who likes swinging a bat, cricket can be good for the ego. Cricket is a swingfest in which a batsman (not batter) can be at the wicket (not plate) for hours, literally.

Americans most easily understand the game in the context of its American cousin, baseball. (In fact, experts' opinions range widely and passionately as to whether baseball is a derivative of cricket.)

In cricket, a below-average batter hits fewer than 40 runs in a match. Good batting means a "half-century" (50) or the rare but coveted "century" (100).

A gloved wicketkeeper acts like a catcher, but the other fielders handle the blistering 5.5-ounce red leather ball without mitts, making the cork-filled sphere look as soft as rubber in their bare hands.

"We think baseball may be too easy," said one cricketer, who shall go nameless.

To test this theory, I try a turn with the willow bat, which has a flat, wide hitting surface that resembles the kind of paddle once used in fraternity hazing. Wielded down by the waist, the bat is surprisingly heavy.

I strap on two thick pads to protect my ankles, shins and knees, plus spongy gloves to shield my hands. Some cricketers also wear hip, shoulder and chest pads and helmets.

The safety gear is warranted, since a bowled (pitched) ball is often whipped into the ground, generating an unpredictable and sometimes vicious hop toward the batsman. One player in the British Columbia league died a few years ago after a ball bounced up and struck him in the back of the head.

Bowlers, fingers stained red by spitting on and shining up the red ball, usually take a running start of 30 to 40 feet, then slam the ball forward and down in a straight-armed pitch. The fastest recorded pitch is just under 100 mph. Other times, bowlers throw with less velocity but more spin.

And, there's no teeny strike zone. The ball can bounce to either side of you. Often it careens straight at your body. And, you can hit it 360 degrees -- there's no such thing as a foul ball in cricket. Or, you can choose not to hit it at all.

For my terrified sake, they throw powder-puff balls at about 10 mph.

Feeling like a waddling penguin in my padding, I swing and miss, swing and miss. Finally, I connect with the red bullet, scattering it to the right with a hollow-sounding thwap. Hitting about 3 of 12 pitches, I feel clumsy and uncoordinated. But I have a new-found respect for cricket.

Cricket is more than sport; it's a social event.

At a recent summer match at Fort Dent Park in Tukwila, those expecting to find tea or curry might have been disappointed to discover Mexican "pizzas" from Taco Bell lining the picnic table. A few years ago, local teams would stop for a tea break between innings. In deference to time and taste, tea is no more.

"We changed it," said Charles Benjamin, a former University of Washington professor who played national-level cricket in his native West Indies. "People prefer beer to tea."

"Anywhere you go in the colonies, you'll see the kids playing cricket, just like basketball or baseball here, in the streets," says Benjamin, fit and strong at 65. "Playing cricket here in Seattle is a cultural revival for many of us."

In the Northwest league, 10 cricket clubs mingle in a polyglot's paradise. At least five different languages are spoken by the Indians alone.

"I couldn't speak to 75 percent of these guys," says Jack Surendranath, the Tamil-speaking chairman of the Seattle Cricket Club. "They speak Hindi and Urdu. I don't understand a thing they're saying."

English and passion for cricket are the common denominators.

Kal Raman, president and CEO of drugstore.com, calls the sport a graceful combination of individual skill with a team dynamic. "It's more like an addiction rather than a passion," he says.

Raman spends thousands of dollars every year on equipment and pay-per-view cricket matches and at least 15 minutes online a day, checking up on the latest cricket news. 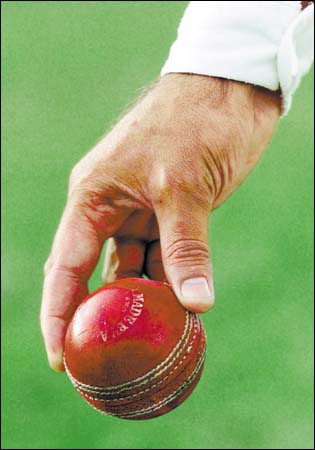 The object in cricket is to score the most runs.


Employees at drugstore.com, which fields a cricket team in the league, are used to Raman waxing enthusiastic about the sport.

"Everybody in my office knows about cricket," he says happily. "That's my first success. I carry around a bat in my office."

Cricket in the Seattle area is quite good, according to Chris Sandford, a British biographer and occasional cricket writer who lives here. [Sandford's name was misspelled in the original version of this story.]

"Some of these players are not short of professional level," he says, likening them to AAA baseball players. "In a colonial revenge trip, Britain is now regularly humiliated by many of these cricket-playing countries."

While the Northwest's gray skies and coolish temperatures are similar to that of cricket's origin country, dress is less formal.

Players still don the "creams" or the "flannels," as the white pants and shirts are called. But, there are no sports coats or ties in this league and it's not at all unusual to spot a pair of gray sweatpants, a collarless shirt, or even, a baseball hat.

On occasion, a bemused and curious local, such as Jeff Wise, wanders over to the Fort Dent cricket field, surrounded by baseball and soccer fields, a train track, a suburban office park, a mall and several casinos.

Often there to unravel the mystery is Deb Das, an avid cricket fan and amateur historian who works for Seattle City Light.

"Now, how come sometimes they don't hit it and they don't run?" he asked Das.

"The batter is in control. All the batter has to do to stay alive is keep the ball away from the sticks. He doesn't have to run," Das elucidates.

In the Northwest league, there are no women playing, though one picked it up quite impressively a few years ago before moving away.

Just one natural-born American, Brian First, plays in the league.

First, a Microsoft employee, grew up playing Little League baseball, then football and lacrosse. He first saw cricket as a high school student during a family vacation in Bermuda. Then, he encountered it in Sri Lanka as a college exchange student. It wasn't until last year in Australia, when friends took him to a match, that First, 35, got interested.

"Over the course of a lot of beers, they explained the game to me. And after a few beers, it makes more sense," he said, laughing.

So, First bought equipment and books, studying the game before he approached the Microsoft team about playing.

First likes the psychological gamesmanship of cricket and the fact that it's an endurance match that can come down to the last five pitches. Yet, he calls it "tediously long."

Understanding cricket, he says, has made him a better baseball fan. But he prefers playing cricket.

"It's like baseball, except better. More happens every play than in baseball. It's really intense. It looks slower than baseball, but more is going on. They're constantly shifting players on the field. The batsmen and bowler duel is much more intense."

Ah, but is it just a novelty? Will he play next season?

P-I reporter Kristin Dizon can be reached at 206-448-8118 or kristindizon@seattlepi.com